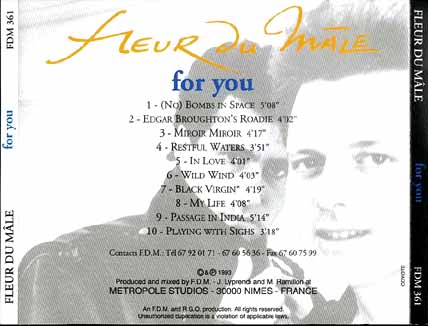 The group was first formed in 1981 after I met a guitarist called Manfred Bergeman . I had originally come to Montpellier to work as a junior lecturer in the english department at Université Paul Valéry in September 1980. In February 1981 there was a student strike at the university and Manfred was organising some music to follow the evening meetings of the student leaders.Everybody would crowd into the Amphitheatre ‘A’ to hear how the strike was progressing what actions were being planned for the coming days etc.. then it was basically a big party with musicians getting up on stage and jamming together till the early hours. On the evening we met I was playing with one group and he with another. We got chatting after the gig and decided to meet up later to see if we could work on some ideas together. We were very productive as a song writing duo and after our first afternoon bouncing chords and riffs at each other we had about ten songs in the making. Two weeks later we had enough material to start playing live. We brought in a drummer friend, Christophe Candelier, and auditioned for a bassiste who was to be Jean Pierre ‘popeye’ Rouvier, the first of several line ups of ‘Fleur du Male’

The first single we recorded was ‘Miroir Miroir’ which also figures in the album above ‘4U’ . We played continuosly through the early eighties and gained a solid fan base in the south of France. Around 1984 I felt I needed a change and decided to take a break which was to last several years.

I met back up with Manfred in at the end of summer 1991. He had just got back from 18 months of military service in Turkey and was looking lean. We had a lot to talk about and after several evenings of chatting and several bottles of Pastis and Jack Daniels, we decided it would be a good Idea to make an album ,a sort of ‘best of’ the early Fleur du Mâle songs,and perhaps write some new ones. We contacted a painist friend called Jacques Lyprendi who apart from being a virtuoso instrumentalist is also a great arranger. He helped us to bring our ideas together and forge them into fully produced songs. We recorded the Album in June and July 1992 at Metropole studios in Nimes with a little known but very talented engineer called Michel Ramillon . The songs are all Fleur du Mâle pop rock classics with strong melodies and tight arrangements, and they still rock….